Welcome to our Firm News page. Here, you can read about our firm’s latest news and events. 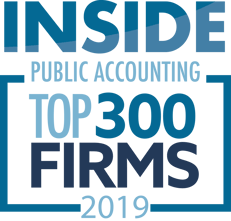 For the second year, Goldin Peiser & Peiser has been named as a Top 300 Firm by Inside Public Accounting (IPA). GPP is one of only 5 firms headquartered in North Texas to make the list.

GPP Managing Partner Allan Peiser said, "We are pleased to be recognized for the second year in a row as a Top 300 Firm by IPA. GPP is successfully hiring new talented staff to service the our growing client base and expanded non-traditional service and consulting/advisory lines. We anticipate continued expansion in the years to come."

IPA’s annual rankings of the 400 largest firms in the U.S. are listed from the multi-billion-dollar Big 4 to firms of roughly $5.5 million in net revenue. The list includes firm headquarters, MP, net revenue, ranking in the previous year and percentage change. The rankings are compiled from data gathered in the annual IPA Survey and Analysis of Firms, which attracts participation from firms throughout the United States. In its 29th year, IPA's annual ranking of the largest accounting firms is the only one of its kind in the profession.